For more than 30 years I have been a resident of Jefferson County and the City of Wheat Ridge with my wife Julie and our two children. I was born in North Denver near old Elitches and grew up in the house that my father and mother built in the early 1950s. I attended Edison Elementary, St. Mary Magdalene Middle School and Holy Family High School. 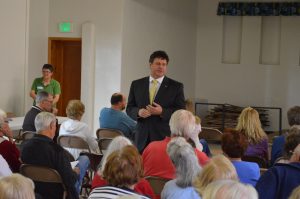 Over the years, I have changed careers by my own choice. I believe, “It is always in one’s best interest to keep re-inventing yourself. It helps keep your mind clear and open.” I have owned a software consulting company and a coffee shop in Wheat Ridge. Additionally, I have worked as a commercial banker and am now teaching special education classes in Jefferson County Public Schools – Wheat Ridge High School (WRHS).  My last day with WRHS and Jefferson County Public Schools was 12/31/2018 due to winning the election for Jefferson County Treasurer.

For the last 23 years I have been involved with city government in Wheat Ridge and the metro area. I was first elected to City Council in 1995 after running and losing twice to incumbents in 1991 and 1993. In November/2015 I was elected City Treasurer and in November/2018 I was elected Jefferson County Treasurer.

I enjoy working with stakeholders on win-win public policy.  Some of the groups/projects that I have worked on include:

Vision, Leadership, Experience and the Proven Ability to Get Things Done!